Modern methods of dry ageing meat have been around for decades, but it’s only in recent times that butchers and chefs have truly mastered the art.

Thanks to a greater understanding of the molecular process and the advent of modern technology, dry aged steak is better than ever, and unlike anything you’ve ever tried.  Even so, there are different ways to approach it. Read on to learn more about the traditional dry ageing meat process – and how Meat & Wine Co does things a little differently.

During the traditional dry ageing process, a large cut of beef is placed in a dry ager cabinet and left under highly controlled environmental conditions.

“Our fridges are accurately climate controlled so we can set the humidity and the temperature inside of the cabinet. It never changes and fluctuates very little. The meat sits inside and does its own thing. From there it’s a waiting game,” explains Senior Head Chef Thomas Godfrey.

This allows the proteins within the muscle fibres to break down the muscles and fat in the cut, creating a far more tender, flavourful steak.

But that’s just the inside.

On the outside, bacteria forms a hard crust on the meat, which stops the cut from drying out too much, while also protecting it from harmful bacteria that could cause the meat to spoil.

Different chefs and restaurants allow the beef to age for different lengths of time. Steak aged for one month is relatively common, but some will age beef for up to several months.

Once it’s ready, the chef removes the cut from the dry ager, and discards the hard crust. This reveals perfectly aged, delicious beef ready to be cut into steaks and cooked.

However, things are slightly different at Meat & Wine Co.

How we dry age steak

The Meat & Wine Co follows the traditional method of dry ageing steak – but only for the first three weeks. At this point, we coat it in butter mixed with animal fat.

This butter basically does the work of the bacteria-built crust, keeping the meat inside from drying out and spoiling. Usually, this crust is a major source of wastage, as it must be cut away before serving (it’s far too tough to eat), which sees as much as 30-40% of the total steak thrown in the bin.

With our coating of butter, that thick crust doesn’t form, so there’s far less wastage as we don’t have to cut it off and throw it away. The meat is still aged for six weeks, it still gains that unparalleled tenderness and flavour, but with significantly less waste.

But there’s one more significant reason behind our butter method.

The butter method is exclusive to The Meat & Wine Co, as is the opportunity for an added flavour infusion by adding a subtle hint of something extra to the mix.

“The butter infusion is about adding flavour profiles that are going to compliment the natural flavours you would get in a dry-aged steak, which is your earthy flavours, blue cheese, or honey and thyme,” explains Godfrey.

The AGED infusion on the menu right now is Smoked Charcoal.

“It takes a little bit more time and energy that has to go into it, but for us it’s worthwhile.”

Discover the secret and the success behind our exclusive dry ageing method with a booking at The Meat & Wine Co. 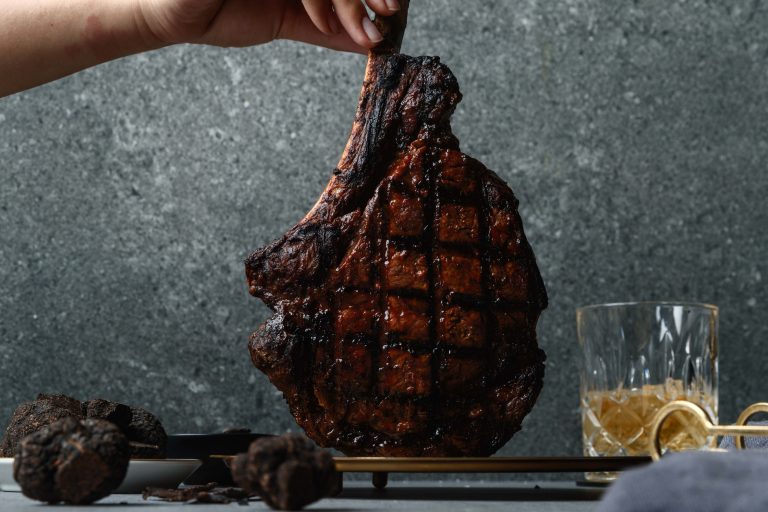 Dry aged steak is on everyone’s lips this year – physically and metaphorically.

This trending dish has become immensely popular in recent years as chefs have increased their knowledge not just in how to make it, but how to perfect it, too.

But what is dry aged steak exactly, and what does it taste like? Read on to discover all the answers to these FAQs and more! The Meat & Wine Co has always been about more than just great steak. From our Afro-centric focus to our exclusive range of beef and our hand-selected wine lists, we’ve always been dedicated to the exceptional. Introducing our newest restaurant in Canberra at the iconic Constitution Place

The Meat & Wine Co is thrilled to announce our newest restaurant opening in Constitution Place in Canberra on the 21st of April 2021.  Diners are able to enjoy our premium dishes, from the AGED program to our exclusive line of Monte beef, to our hand-selected wine list and exceptional a la carte menu options.